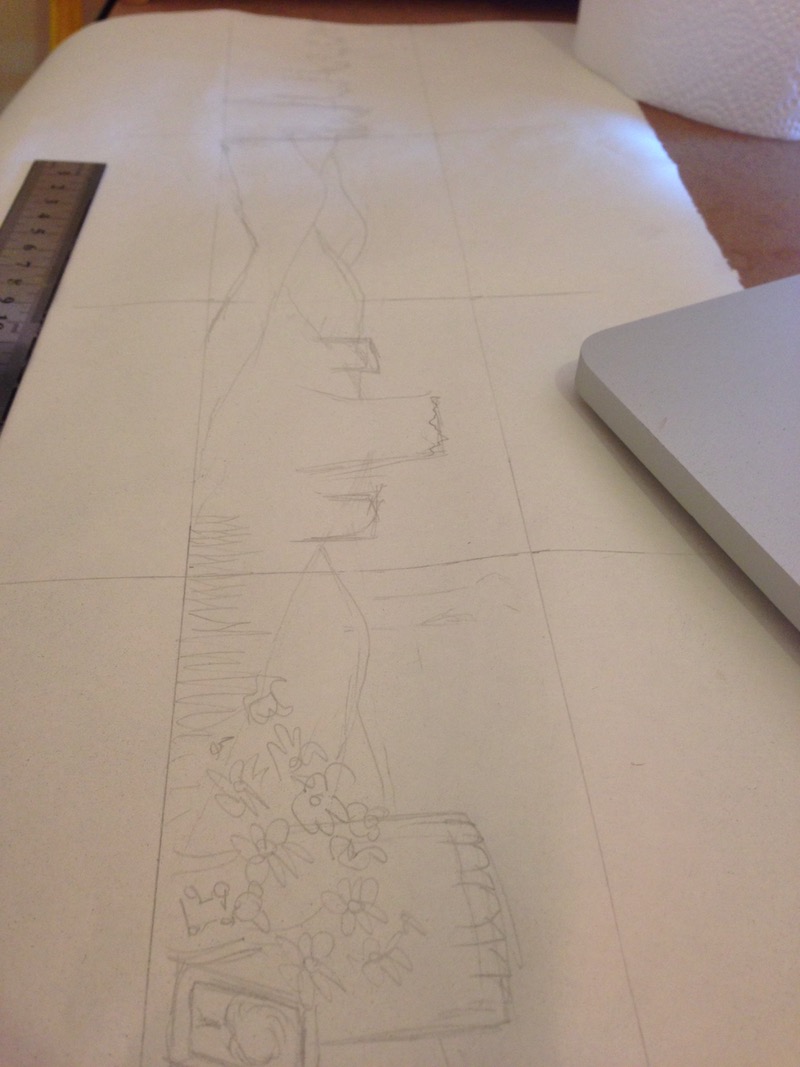 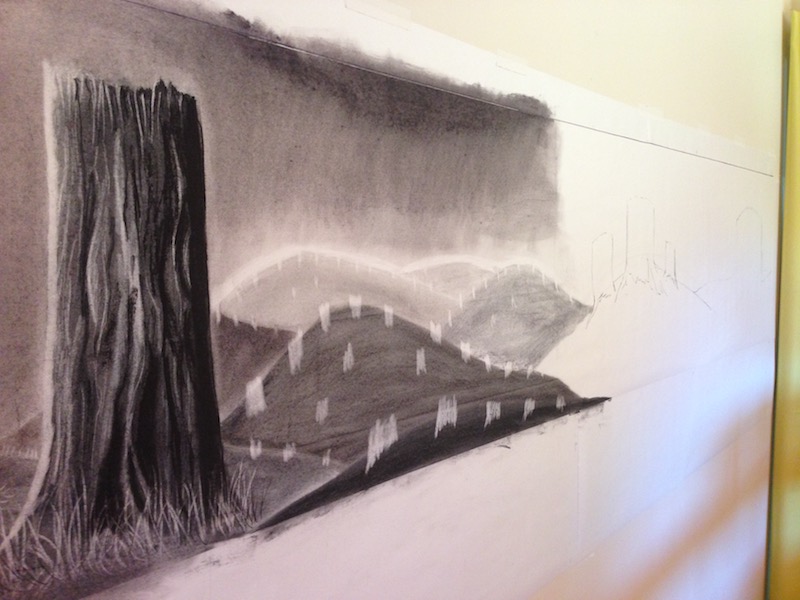 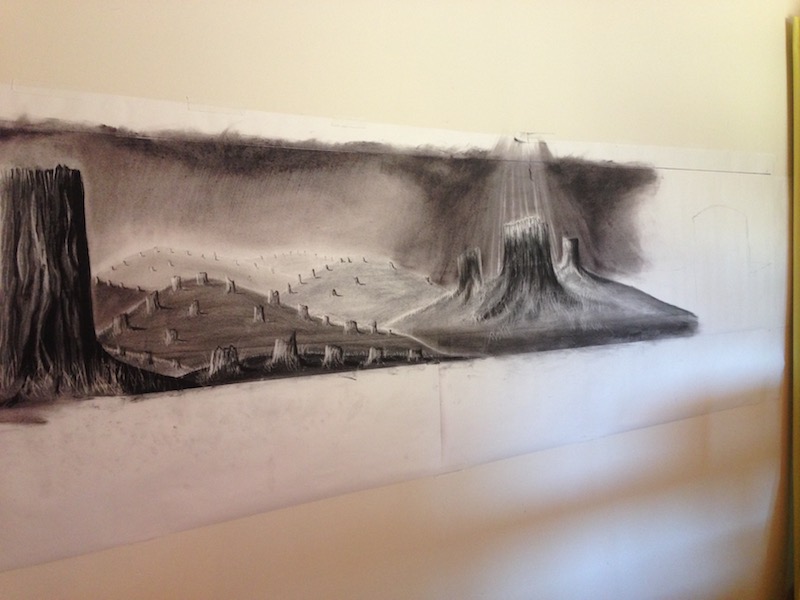 Reflections on the process...

Using as a source some of the initial drawings and photographs I'd taken, I started exploring compositional ways of storytelling in a timeline that made sense. Once that was clear, I did a few sketches exploring arrangements and got clear on just how big I wanted this thing to be and what elements I wanted to include. I divided the sketch into 4 "panels" on the page in order to measure out the larger butcher's paper and work evenly across the space. From previous experience, charcoal is MESSY and I didn't want to spend hours cleaning up so with the help of my partner we taped 3 pieces of paper across the wall - two to protect the surface of the wall and one to draw on (it was a rather awkward 2 person job coz the paper was so long!). Baby wipes handy, I got started. Once the artwork was finished, I found taking photographs of it very tricky. Charcoal is so dense and sucks up light and I faffed about with torches for ages trying to get the right lighting. Also the paper kept ripping if I attacked it with any intensity with my eraser.

Going back a bit, once I'd done some initial drawings and taken some photos, I wanted to work with black pen because it was the medium I most enjoyed using. I wasn't looking at the relative merits of each drawing and approaching them from an open perspective of being informed by what's working or what's not - I was just wanting to go with what I enjoyed most. Sarah encouraged me to not be so attached to my feelings about what I'm doing and instead focus on a formative analysis to discover what's successful. She also encouraged me to focus on the underlying narrative more rather than just being seduced by the impact seeing a cut down tree has on me. As far as enjoyment goes though, I definitely do enjoy working on a larger scale with charcoal more than on A4 or A3. I also enjoy working in monochrome - I get completely overwhelmed by choice when I don't :P

Talk about surrender to the creative process! The meaning of the mural and the story eluded me until after it was complete. Initially, I was thinking only about "trees that used to be" and didn't have a deeper narrative. I had a vague vision of people worshipping trees that used to be as gods, genuflecting and prostrating themselves before tree stumps, bringing offerings of flowers and food and maybe even making sacrifices, Another thought floating around was the tree stump as memorial, mounds of flowers in front of them... framed photographs of the tree in it's former glory... teddy bears and candles like outside the gates of Buckingham Palace when Princess Diana died... but I wasn't sure how to bring it all together. Then after the mural was done, I went on a morning walk and the idea emerged to paint the fallen trees as beings who've sacrificed themselves for our way of life, like soldiers. I wish I could trust that more. Trust I don't have to have all the answers before I begin. Trust the process will reveal everything it needs to, when it needs to.

Reading Picking Up Speed: Re-Thinking Visual Art Education as Assemblages was profound. A ton more ways to reflect on this recent project emerged...

Firstly, to ponder the influence the outcome-driven system of neo-liberal management found at university has on my creative acts as a student. There's a conflict in studying art for me because it's not attached to any work in the world (so far). It feels selfish, maybe even naive but I'm not sure I want it to be. Creating for entrepreneurial purposes changes everything. EVERY thing.


Secondly, seeing my artwork as an assemblage that involves a complex arrangement and relationship between constituent parts, moving bodies and time. Seeing Like Soldiers as a body itself interacting with the body/ies of the viewers transforms the space into one that's dynamic and uncontrollable. The viewer's body can move from one end to the other when seeing the body of the mural. Although the narrative is designed to be "read" from left to right, the viewer can approach it from any direction, seeing individual images and "stories" close up or distance themselves to see the picture as a whole. If in a gallery setting (rather than a small room in a private home), the assemblage of the artwork would also be open to the interaction between the bodies viewing it: being able to interact with others also interacting with the artwork adds another dimension outside of solo viewing.

Thirdly, the materiality of the mural also has an agency about it which I hadn't considered at depth prior to reading this article. The medium of charcoal has a predictable affect - stark and monochromatic but it's physical history and origins as a charred piece of wood adds its own flavour to the drawings of dead trees. Butchers paper is made from trees (generally not sustainably grown ones) and therefore adds more cohesion to the fallen trees the paper holds.

Fourthly, the temporal aspects of how the bodies of the artwork come together is intriguing. I was curious about the immediate verbal responses of "wow" from several students upon viewing Like Soldiers for the first time. It's impact was instantaneous. It didn't require closer and more careful study of several minutes. I'm also aware the nature of academic deadlines creates a temporal limitation. I had to work faster than I would have like in order to submit the project on time and there was no space to let the artwork "rest" between working sessions so time itself could inform my next steps creatively on the piece.

And finally to see my artwork as an invention by considering:

(1) Working with learning encounters rather than models of an end-product driven project. This is about me being as present to the process as possible, to be more present to the process than the end result I want to achieve, to be willing to take on guidance from the teacher and respond in my own unique way without knowing how it will turn out

(2) Becoming sensitive and attentive to student's way of learning. This is about me understanding more about how my artwork may impact people viewing it, becoming awake to what factors contribute to the viewers ability to witness the artwork, the psychology that may drive their personal desire to engage with art and asking myself what is the affect I want my artwork to have - and how to create to increase the chances of my art having that affect

(3) Questioning the desires of hegemonic traditions and goal-oriented effectiveness. This refers to the power I've given to external authorities and teachers. Sometimes that's a good thing. Other times, rebellion is better. The deep query for me here is how willingly do I give this power to authority? How conditioned am I, as a sensitive soul to conform and create artwork accordingly or create artwork that ticks the boxes of the grading criteria?

(4) Becoming open, vulnerable and sensitive toward unexpected events. This speaks to me of the inherent uncertainty in any act of creation. It's all unpredictable and therefor vulnerable. There's nothing outside of the "encounter" the artwork has with the viewer and the quality of that encounter cannot be controlled.

Reading Art and Public Space: Questions on Democracy opened up some big questions for me. Do I have a right to make art in public spaces? Do I consider myself a member of the "the public"? Do I have a voice? Don't I need to gain consensus from the local people forced to witness my art in the public space before undertaking it? Or authorisation and approval from some higher power responsible for these things in order to make my art in public? And does the need for (or subtle conditionings behind such) questions themselves prove the obliteration of public space? If I (akin to the homeless mentioned in the article), have been denied a voice (either overtly or by complex layers of suppression) as a member of the public, then what is public space for? For the wealthy, the privileged, the ones with a whole sense of self-hood, solid self-esteem and a stable home. Questions like these contributed to my intense self-consciousness and anxiety when attempting photographs for this project Like Soldiers (link). I know very little about politics and have actively avoided political discussions for most of my life due to a sense of my powerlessness as a single individual and lack of interest (although the latter may be a direct result of the pointlessness mentioned in the former). Much food for thought here.