"...some of the things I talked about 40 years ago have become reality. When we attended global conferences and talked about all the earth warming and the problems about climate change, nobody listened to us. It was mostly scientists; I was just one artist there. And nobody gave a damn about it. People always understand everything in retrospect." 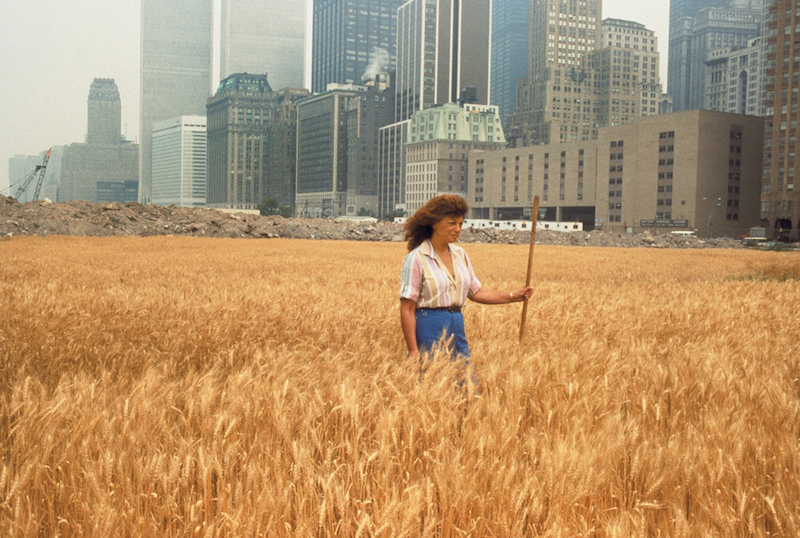 Wheatfield - A Confrontation: Battery Park Landfill, Downtown Manhattan
"Public art existed all along, but ecological art just naturally grew out of my thinking and writings in that area for years. I didn’t get involved in it; I started what then became a movement." 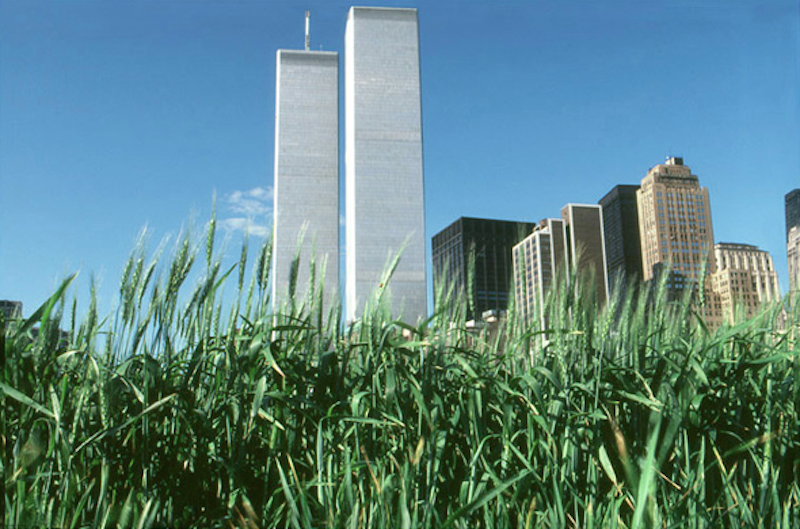 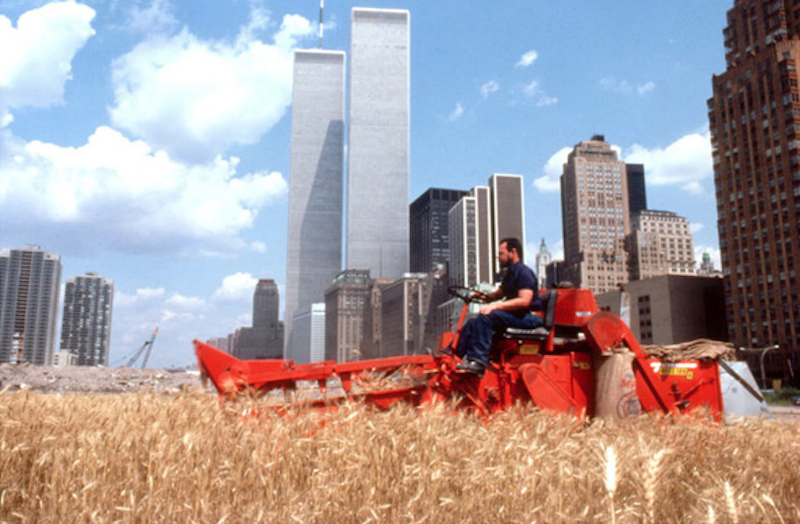 "My work is about helping humanity. Looking back on my work, I now see that each one of them is trying to help a major problem for humanity and trying to give it a benign solution. Every one of my works, when I’m looking back, becomes some kind of solution, or something to concentrate on. Something to pay attention to and maybe change direction." 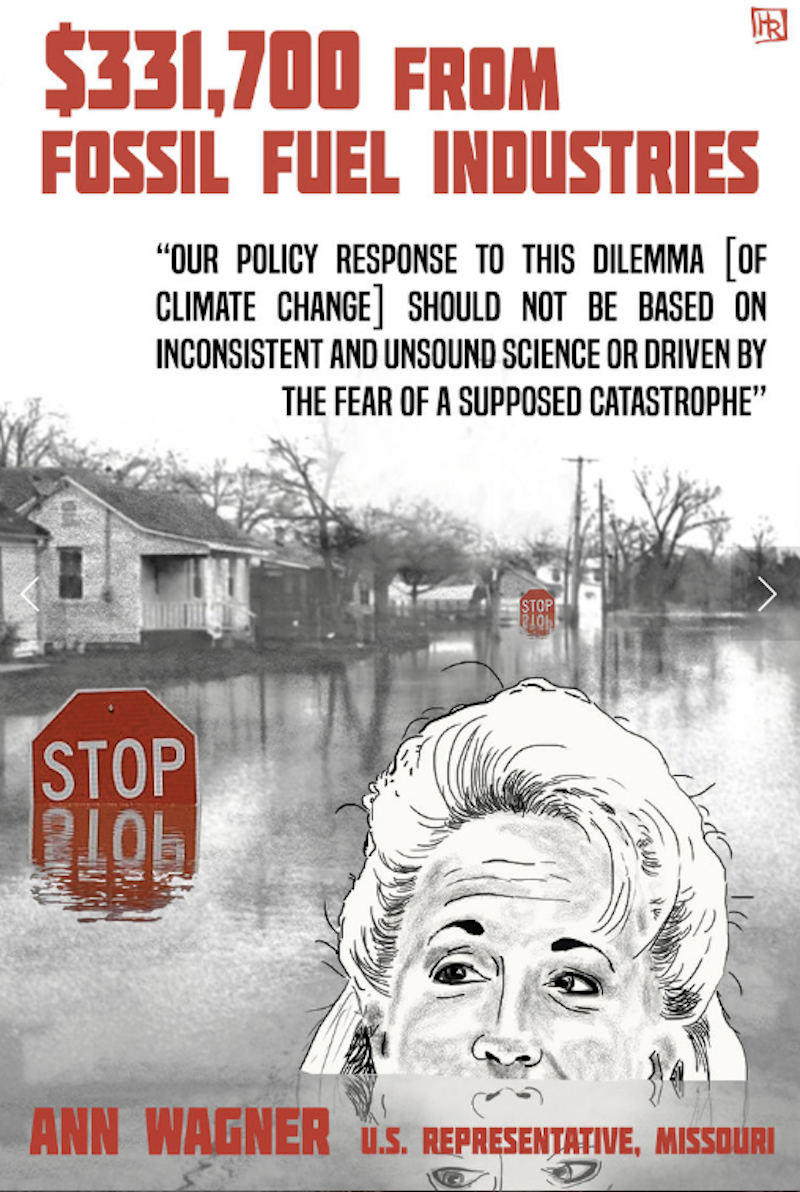 The Cost of Denial
"Let’s be real. As much as we love to hate them, most politicians aren’t stupid. Then why, when 97% of scientists agree that climate change is real, do so many lawmakers fail to act against it or flat out deny its existence?

The Cost of Denial offers an answer to that inquiry. Focused on 10 candidates that were up for reelection in November 2018, the project places each candidate’s campaign finance data next to one of their climate-denial quotes or votes. And the coincidences are striking.

All this is illustrated in images heavily influenced by Soviet propaganda. Celebrating that artistic form’s lack of subtlety and abundance of ulterior motives, The Cost of Denial highlights the hidden bias of each politician’s stance. It does so while depicting them standing serenely amidst the effects climate change is having, or very soon will have, in their districts." - Hannah Rothstein 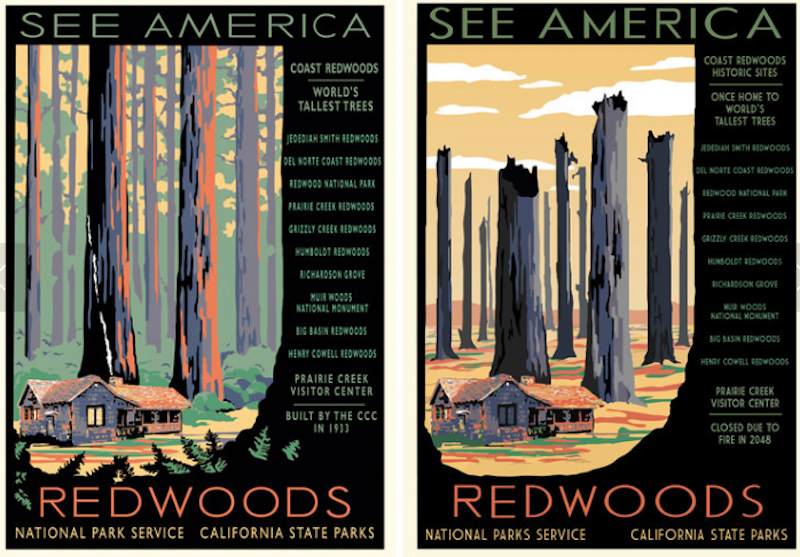 We have the ability to outsmart the issues highlighted in National Parks 2050, but we need to act now. From Franklin to Fuller, America has been made its greatest by embracing ingenuity and innovation. If we dive headfirst into inventing for a brighter future, we can prevent National Parks 2050 from becoming a reality.

I hope the series inspires everyone, from everyday citizens to policy makers, to acknowledge the issues ahead, admit that climate stewardship is a non-partisan issue, and work together to find the solutions I know we’re capable of creating." - Hannah Rothstein 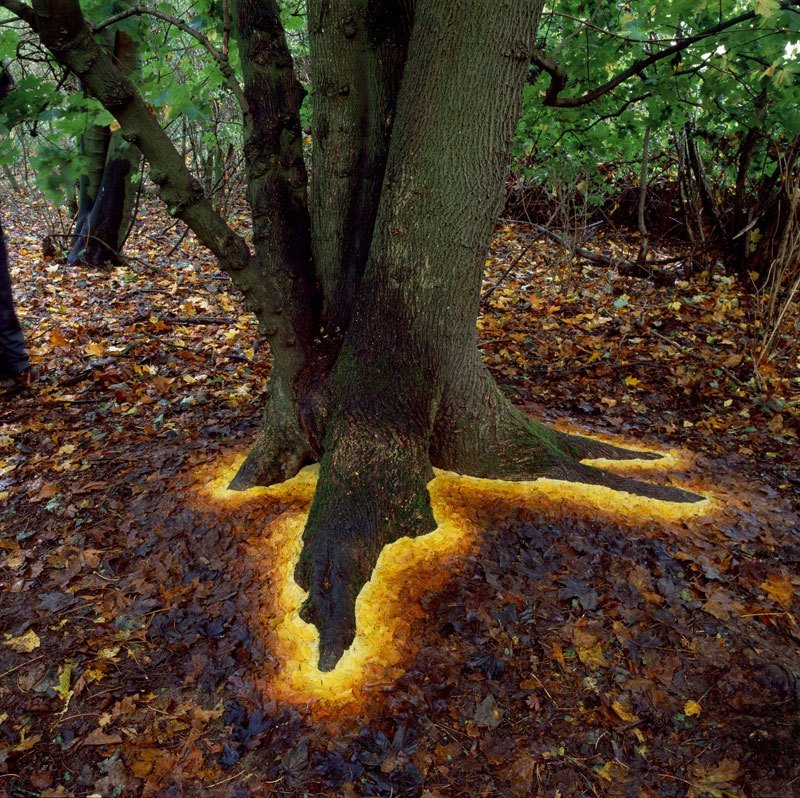 Andy Goldsworthy is a British artist known for his site-specific installations involving natural materials and the passage of time. Working as both sculptor and photographer, Goldsworthy crafts his installations out of rocks, ice, leaves, or branches, cognizant that the landscape will change, then carefully documents the ephemeral collaborations with nature through photography. “It's not about art,” he has explained. “It's just about life and the need to understand that a lot of things in life do not last.” source 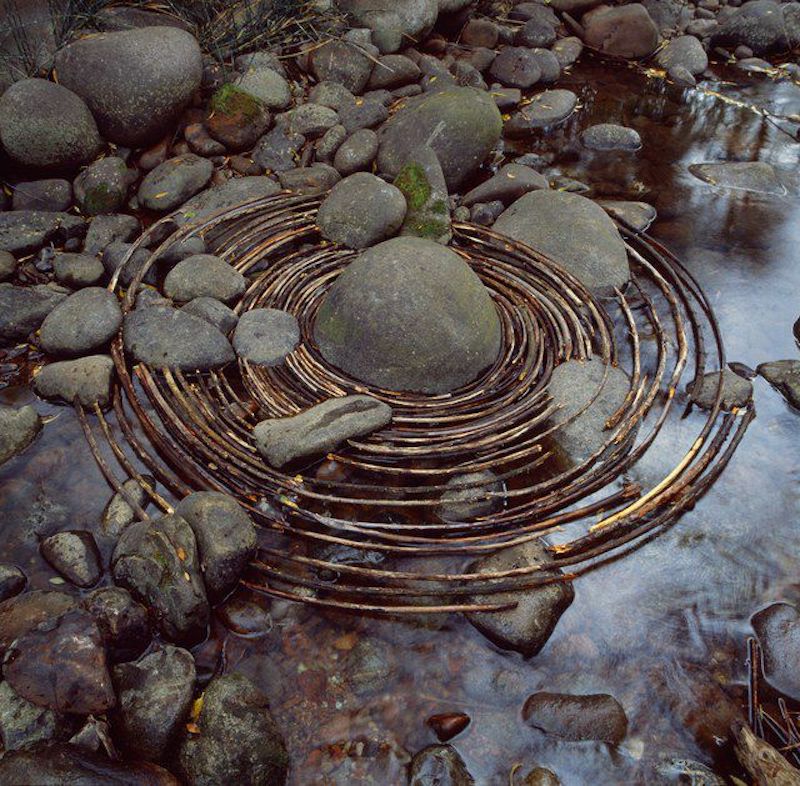 “Movement, change, light, growth and decay are the lifeblood of nature, the energies that I I try to tap through my work. I need the shock of touch, the resistance of place, materials and weather, the earth as my source. Nature is in a state of change and that change is the key to understanding. I want my art to be sensitive and alert to changes in material, season and weather. Each work grows, stays, decays. Process and decay are implicit. Transience in my work reflects what I find in nature.” - Andy Goldsworthy

"Clearly it is only in her very last refuges that nature is still intact, inexhaustible; it is only there that enchantment is still reality. On any day of the year, in every season, in any light, in any weather; in the Largest and Smallest... These days however, people are not interested in this. Nature is no longer an issue, except to a few Greens, who mostly can no longer tell a lime tree from a beech tree." - Nils Udo 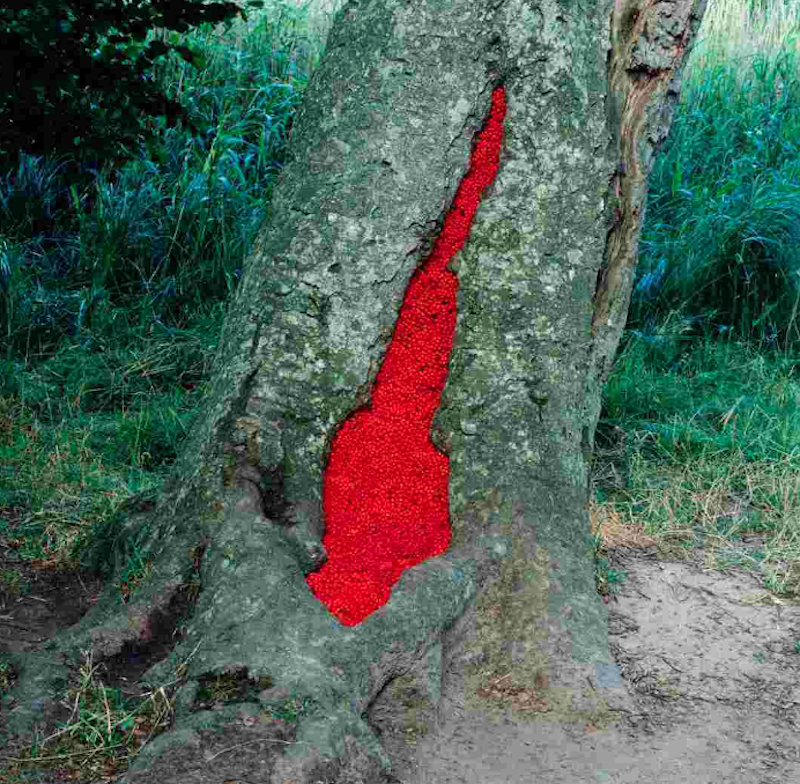 "...Even though I work in parallel with nature and create my interventions with all possible caution, they will always remain a fundamental contradiction to themselves. It is this contradiction on which all my work is based . Even this work cannot avoid one fundamental disaster of our existence. It injures what it draws attention to, what it touches: the virginity of nature." - Nils Udo 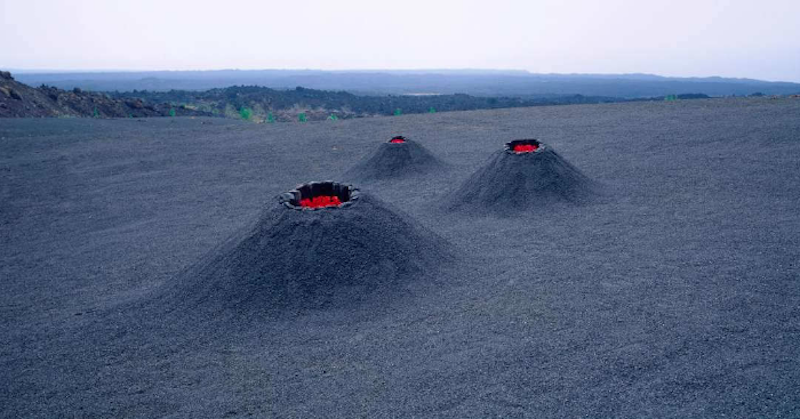 
"I want the superstructure to be beautiful. That’s like when you deal with difficult philosophical concepts, you have to make your images visible to get the viewer. And once you get through admiring the beauty, you’ve got them. They start thinking. Otherwise they would walk away from thinking. People have too many problems during the day; they don’t want to think."

This interview with Agnes Denes speaks of her frustration with studio work and desire to get out into the world and make her art public. She tried many forms of painting and other studio methods but found them unsatisfactory. I wonder if perhaps there's something here for me in my journey... I find it hard to motivate myself for myself, I'm not that driven but when I contemplate engaging other people, or putting something creative out into the world, everything changes - it becomes immediately more edgy and powerful, the desire to be seen or have an impact in some tiny way calls me (more so than working on my actual skills as an artist hahaha!).

2. The Lyricism of Pure Thought: the Unity and Intelligence in the Art of Agnes Denes
This article inspired me because it's focused on the ideas and thinking process of asking deep and meaningful questions behind the creation of an artwork. It values the documentation of the thinking process as equal to the finished work something which I'm not yet able to do. I tend to discount the depth of my ideas and rush through to create, believing creating is more important. But for Denes, it's all about integrating the intellect in everything she does.

3. The Work of Art in the Age of Mechanical Reproduction by Walter Benjamin (1935)
4. On Photography by Charles Baudelaire (1859)
I've been pondering a lot lately the irony of studying visual art online. Of giving my full attention to something so heavily mediated in which the very medium it's being communicated via changes the impact of the artwork entirely, taking it out of context, adding an agenda that does not exist when viewing a work of art in three dimensions. The readings above ponder the influence of photography on art and kick-started my own wonderings.