Drawing for me is an intimate act of getting to know the things that can be taken for granted in day to day life. This picture of Springbrook and surrounds captures the wildlife, plants and mountains that have spoken to me most deeply over the years. There's a story behind each element in the picture of animal communication, awe-inspiring moments that have made me cry, grandfather trees, precious orchids, swimming in rock pools, pain, fear, blood-sucking leeches, hiking adventures and endless birdsong. It's a personal memento and love note to a beautiful and powerful place.

Like the rainforest. this work is noisy and busy. There's a lot going on everywhere one looks. At first glance, abundant natural environments give a general sense of green and trees and animals that all blend together. But after a few moments of attention, the life of each single element becomes evident and it reveals itself as a solitary and unique thing that has a story and a vocation all it's own. There's a conversation going on in the rainforest that can be overwhelming - everyone is talking at once but strangely, you can hear every plant and creature's voice clearly.

This is a large scale line drawing in black ink of a rainforest and mountain views. There are many trees, waterfalls, plants and fungi, birds, animals, reptiles and insects pictured crowded together. Focus is created by variations in the amount of black used and density of pattern in line. The tonal values of black and white create contrast. This is an example of recording directly blended with imaginative elements from drawing as decoration. Scale and perspective are used playfully to capture not so much reality as the impact each element has had on the artist. Perspective shifts in the picture - it journeys in layers from distant vistas to close details, there is depth in the background which is at times vertical rather than receding. Shading and shadow, which may give a better clue about scale and relative position of each element is absent from the drawing, hence the items appear somewhat flat and indistinct from the surface of the paper rather than capture three dimensionality. The drawing relies heavily on linear contour to tell the story. The poster is centrally focused with a geometric structure holding a mandala shape of circles and precisely positioned phases of the moon radiating outward. A symmetrical balance is achieved by a tree and waterfall of similar mass positioned on the left and right of the page. There's an unfinished feeling to the work - pencil marks are evident and the pictures in the mandala have rudimentary marks only that need to be enhanced to add more depth and feeling to the piece. 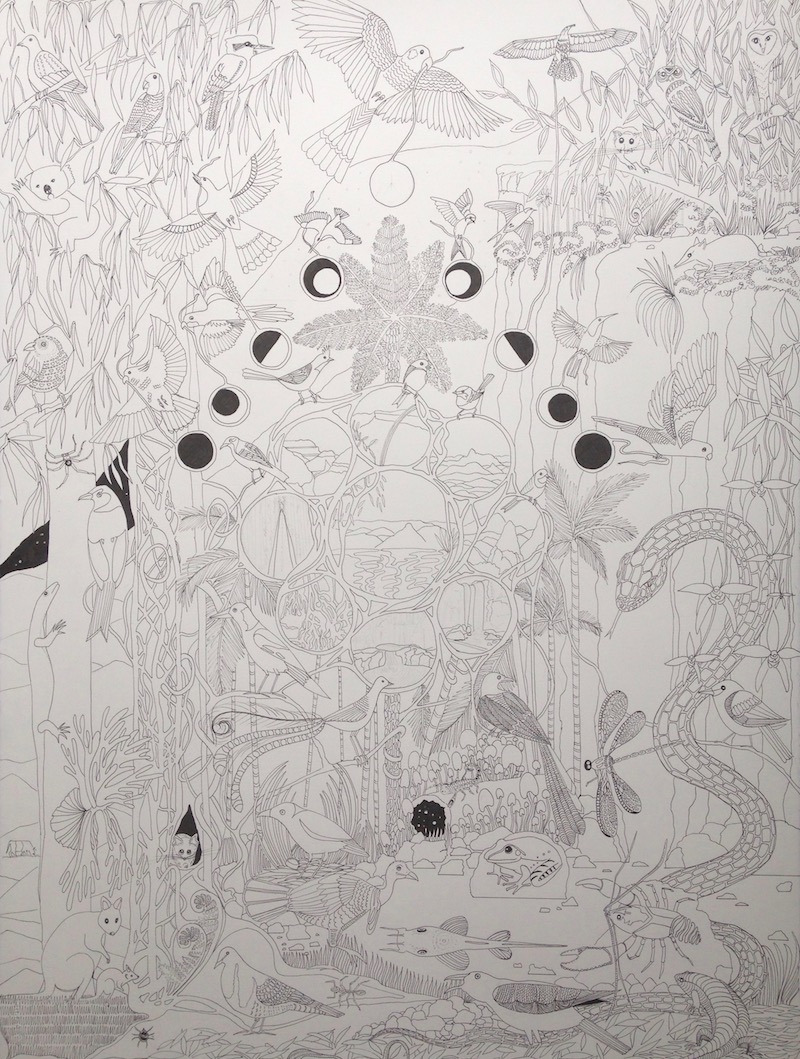 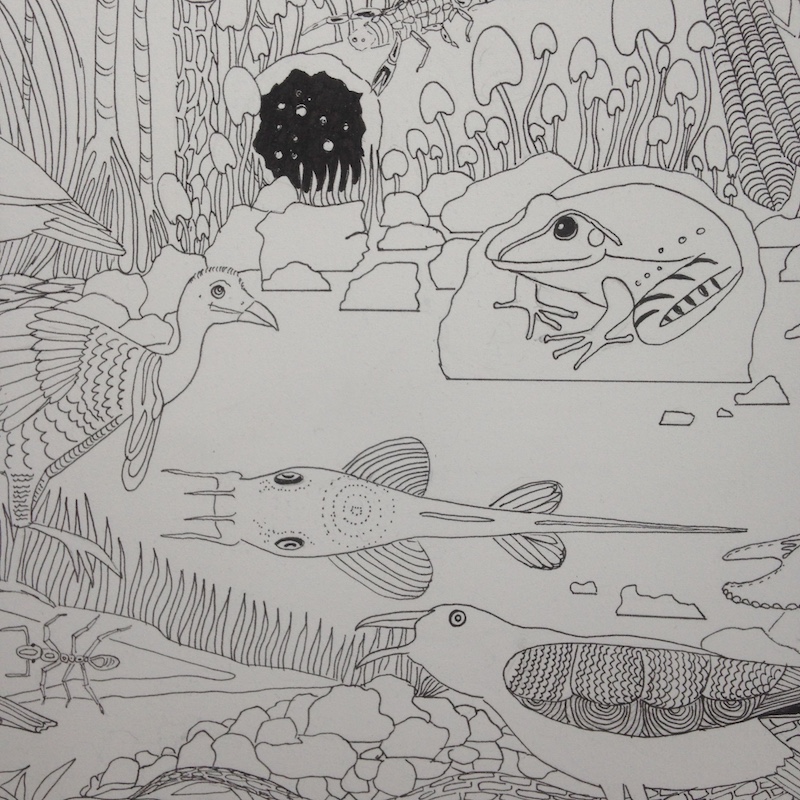 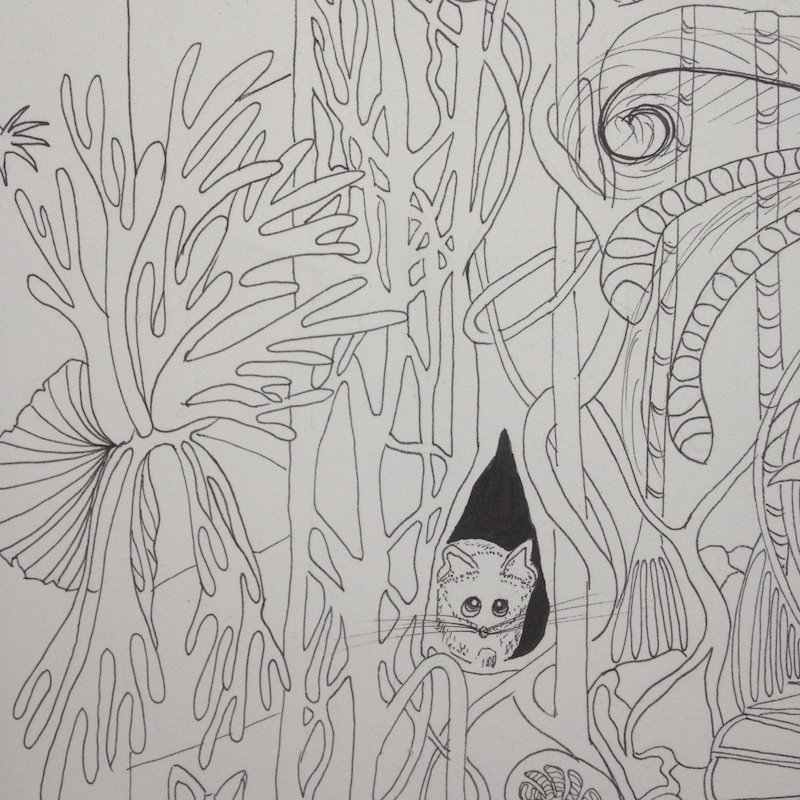 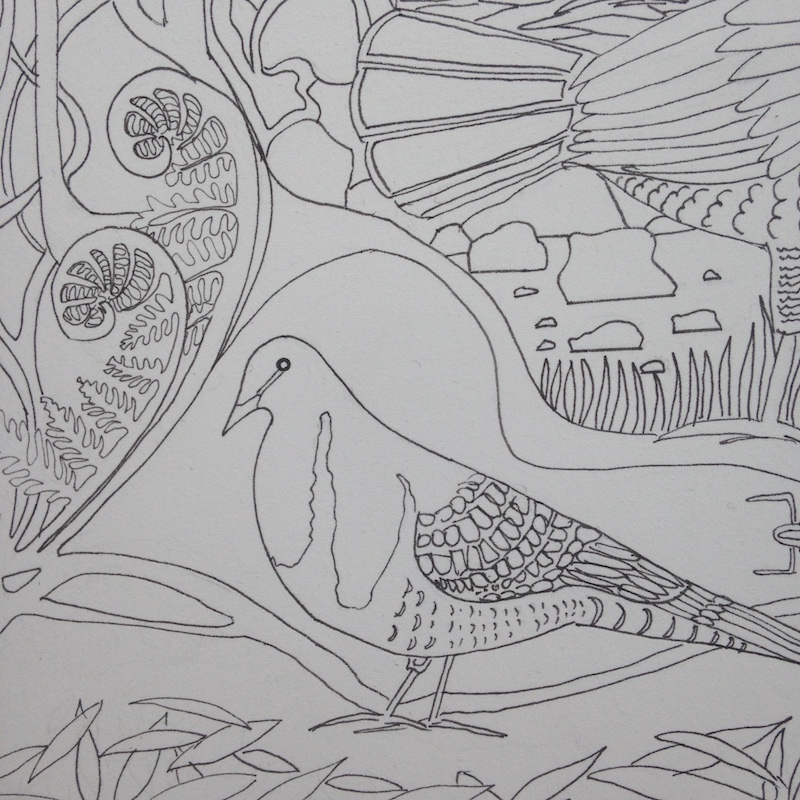 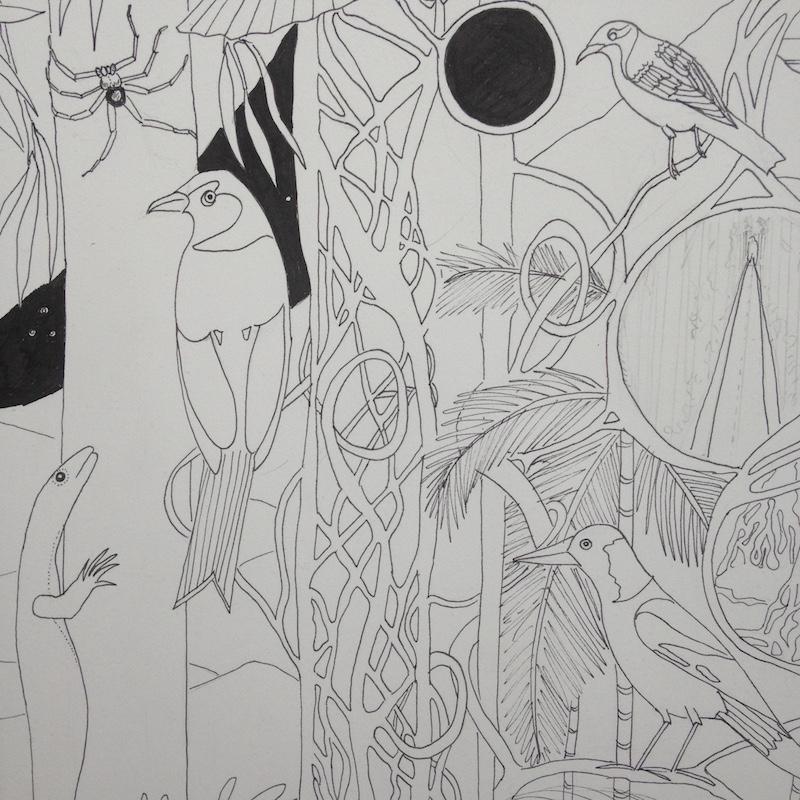 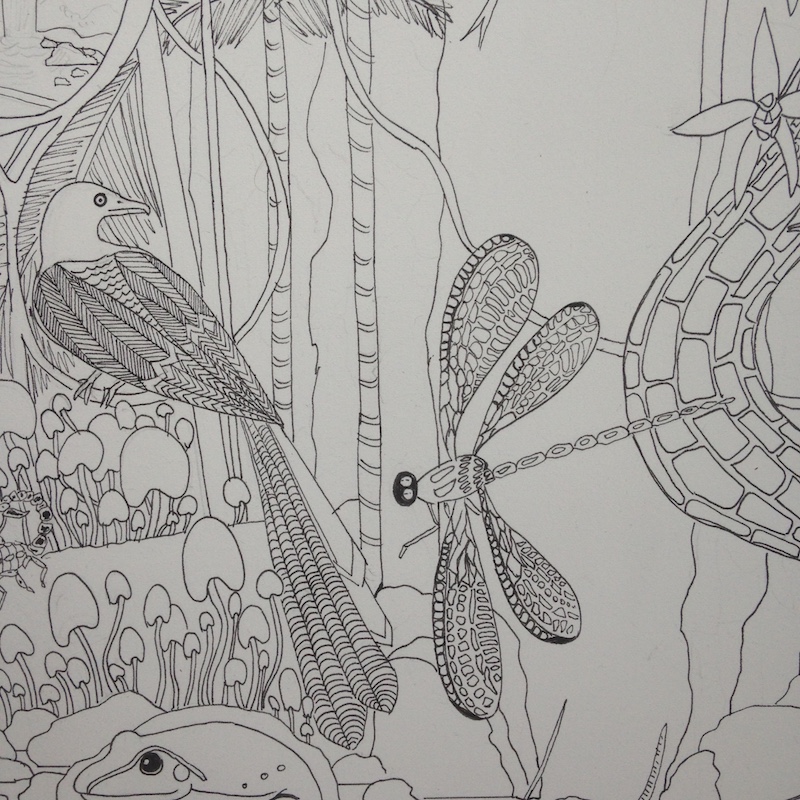 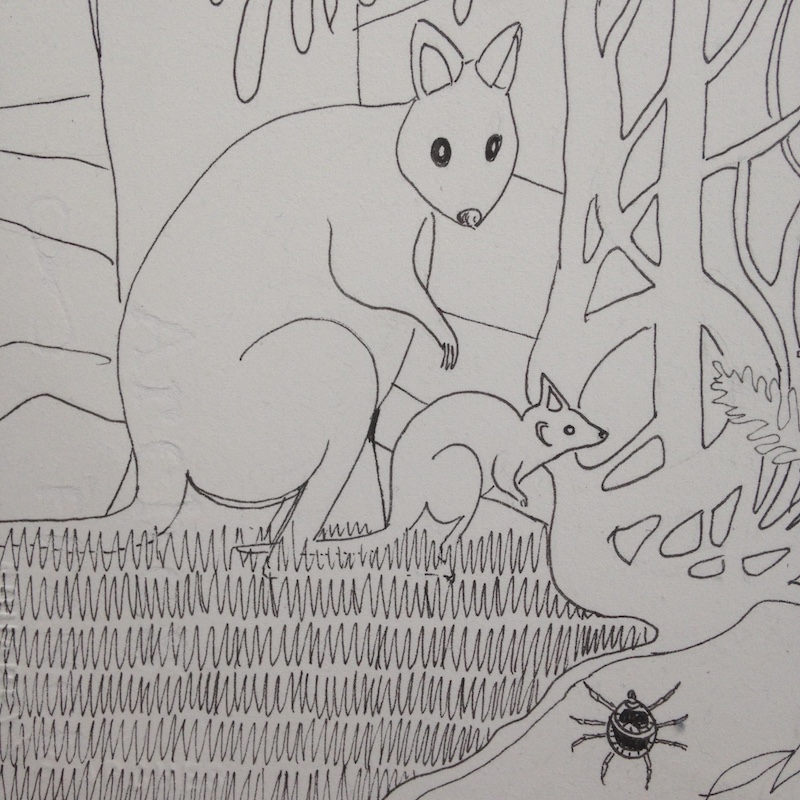 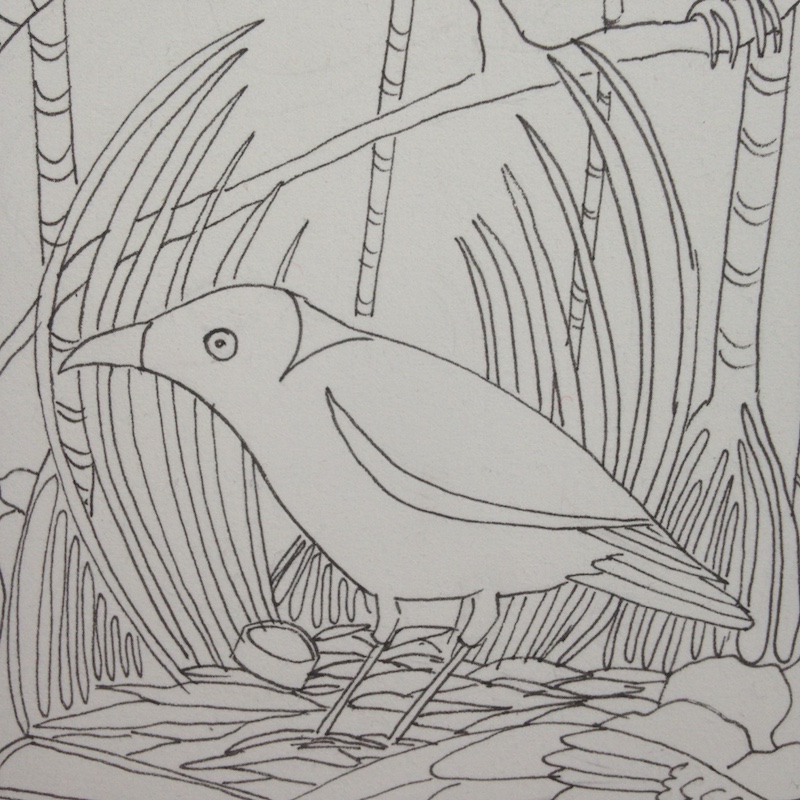 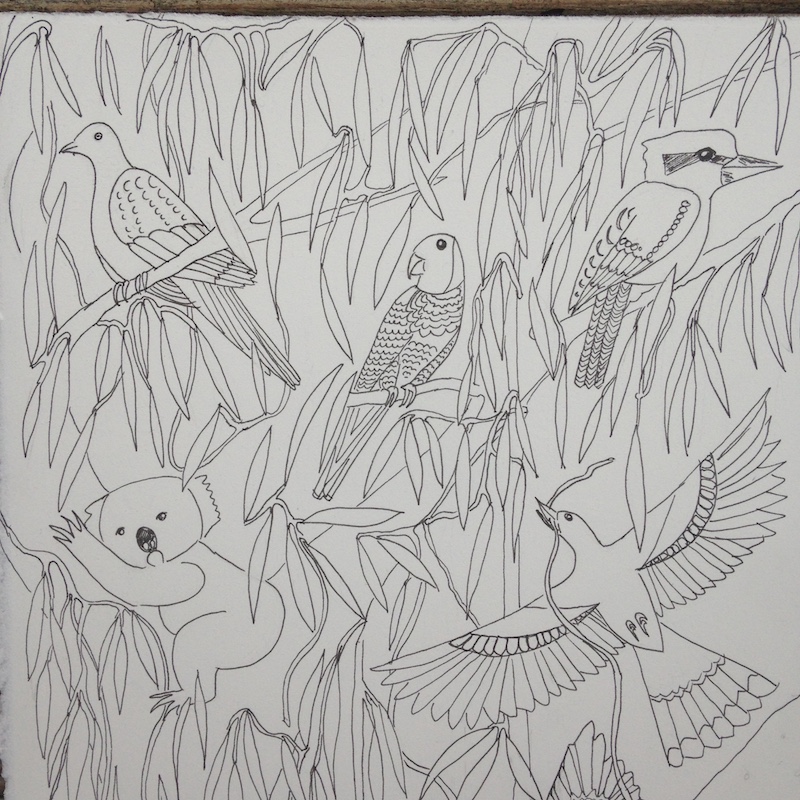 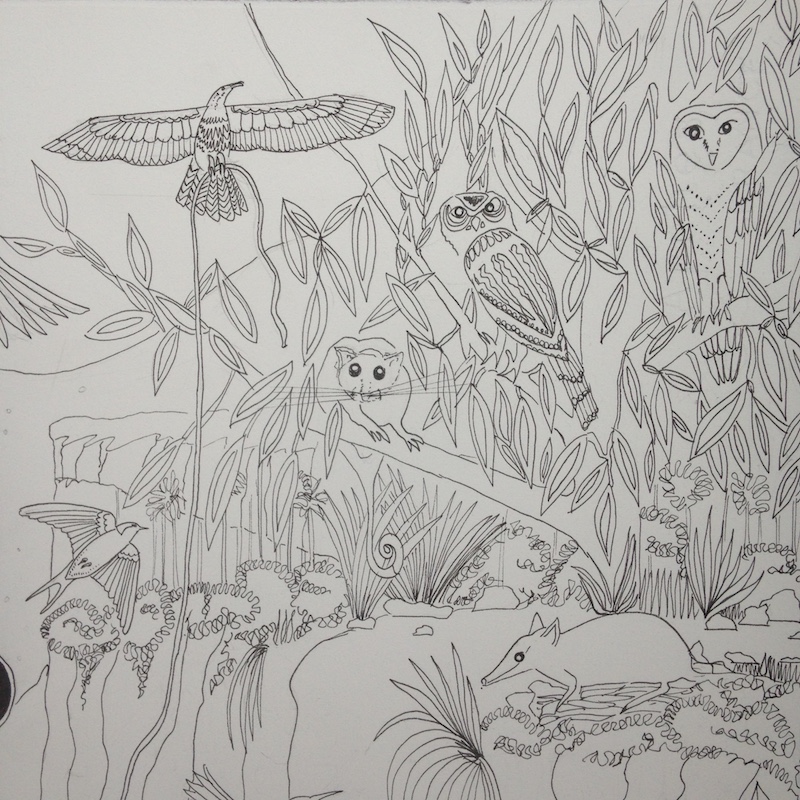 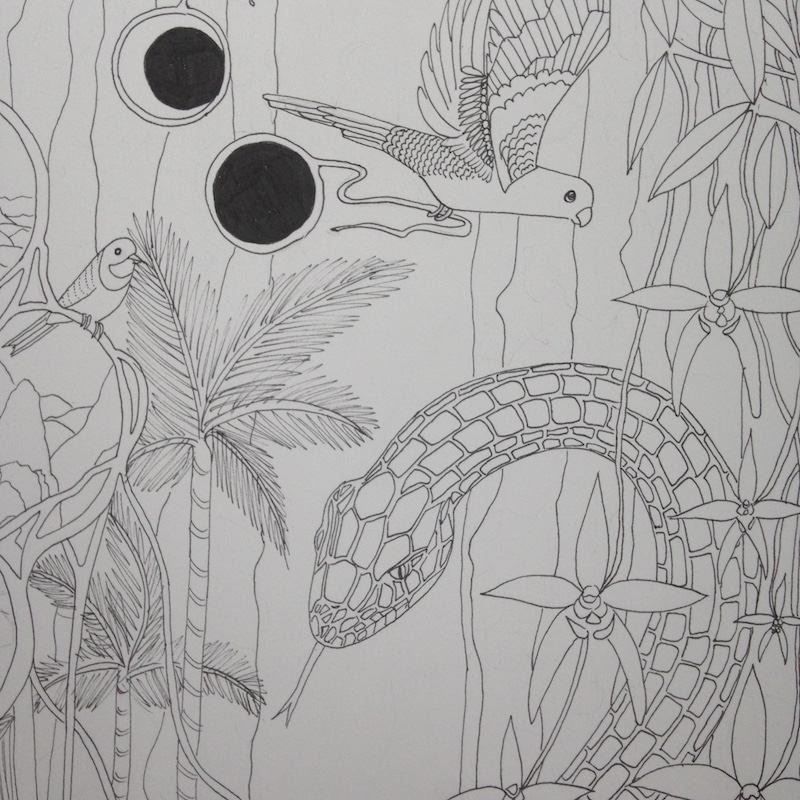 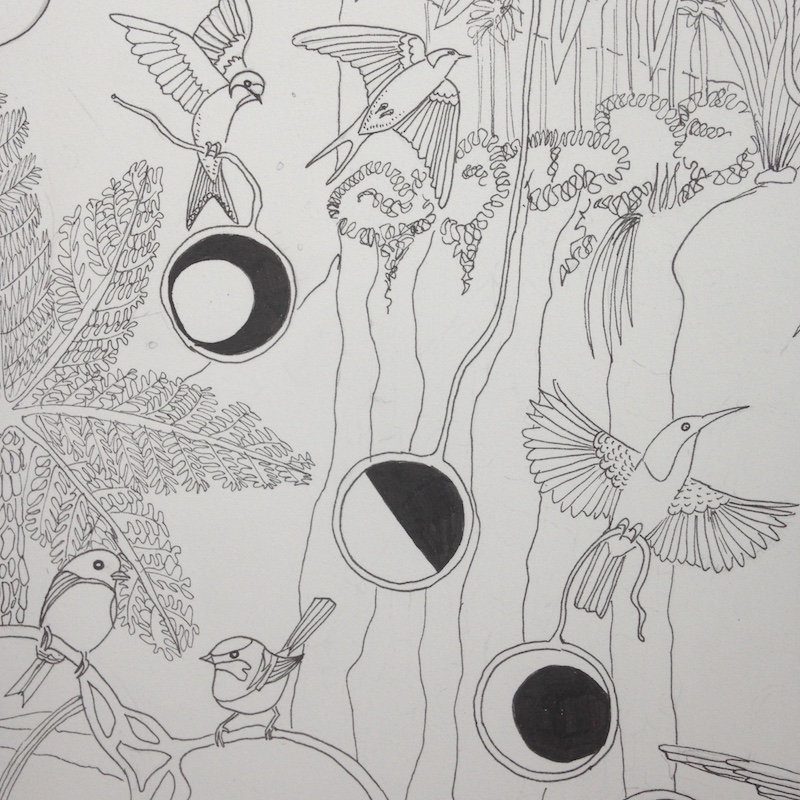 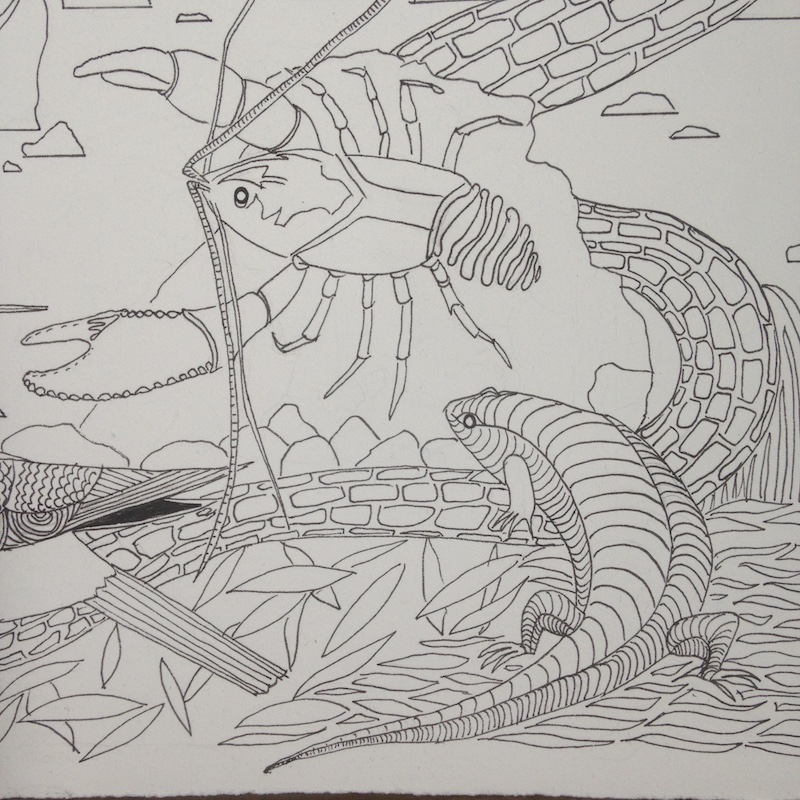 Developing and refining technical and conceptual skills through a demonstrated process of experimentation:

- through this project I've learned that drawing is an intimate activity. You get to know your subject on a deep level - how it moves, the shapes it takes, it's anatomy, what it's essence is in expression - the quintessential pose for that creature that makes it immediately obvious.

- because this is a large and detailed work, I knew composition would be important to the final result. I wanted it centred and couldn't leave it to chance so took time in preparation with measurements, markings and compasses to make ensure objects were centred. In this, I also attempted to create symmetrical balance with 2 large elements - the ghost gum on the left and the waterfall on the right - their of a similar height and width.

- It was interesting to try and maintain this balance as there were so many elements to include and life on the mountain kept revealing more! But I found that the central focus helped create and anchor and the animals, birds and plants were arranged around it easily in layers.

- I failed dismally with the timeline. Had a strong start but then slipped off into procrastination land and some unpredictable life stuff. There were also 2 days I planned to work on this project where the power was out all day - my house is very dark so I couldn't do fine detailed pencil or pen work.

- The resources were simple and I gathered them early on which made things easy - unlike the recent sculptural project where every time I worked on it, I realised with great frustration I didn't have what I needed to take the next step. For this project, all my tools were reliable and easy to store and obtain. Working on the piece itself was an exercise in poor workplace health and safety - it was so large, I spent much of my time, kneeling on a chair bending over the poster. Oh for the love of a drafting table!

- Other projects I had less fear about kept dominating my time management and project planning skills and it wasn't until most of them were done that I could really focus on this one piece. This feels like a lesson in understanding my natural creative flow - I'm much better doing one thing at a time and going deeper and deeper than scattering my energy and bouncing around. But... that's just a fantasy. Life doesn't seem to work that way :P

- Learning how long things take is humbling. So much of being creative is about simply not knowing how long things take because I've never done it before. Inexperience threw my timeline out - I could spend 3 hours drawing and have drawn only four things. It was an agonisingly slow process of discovery and no matter how much time I put in, there was (and still is), more to do.

Identifying typical problems that occur during the development of a creative project, and how to avoid or resolve them.

- working fastidiously but not feeling like I was getting anywhere until almost the end. This felt helpless and pointless so I kept avoiding sitting down and doing the work.

- it was challenging to have to keep putting the poster away so we could use the table. I kept losing touch with it, kept losing my connection so it was harder to get back into after an absence. I'd love to have enough space to live with my art and keep meeting it from different angles as I move through changing internal spaces and moods.

- I get that confronting fear is an ongoing dance for anyone walking the creative path but fear levels inside me on this project were something else! It's like I confronted every dream killer I've ever met in my life. I had memories of drawing in school around the time I stopped drawing - one little thoughtless comment and my confidence was shattered. Failure... not knowing enough.. don't know how to draw... it's gonna look like crap... etc etc hounded me day and night whenever I thought of this project. It contrasted with the sculptural piece - in that, if something didn't turn out, I could pull it apart and start again - I knew how to identify and fix issues and could do it without emotion. In this, the art of drawing is still a mystery to me - I feel like anything I've drawn well here was a happy accident.

- physical pain from another project affected my ability to draw. My poor fingers really had the crap beaten out of them from all that working with wire.... there was blood several times and the tips felt bruised so it was hard to hold a pencil or do things like type for several days.

- perfectionism - I got caught a few times trying to track down on google pictures of the precise animal or plant that I know in a huge and thriving eco-system of world heritage national park. Hugely overwhelming. Yes... I could've just drawn ANY little brown finch but I had to have the grey strike thrush coz that little bird is the one that hangs around all day. This was definitely a barrier to the completion of the project on time.

- mostly, art seems to be about getting comfortable with the not-knowing, doing one step at a time and showing up as fully as I'm able despite having no idea how anything is going to turn out. The timeline was helpful, but having to commit to a concept was tricky as my concept changed as the project unfolded. Then I felt bad guilty about not integrating the Sarah's feedback on using colour as per my artist of inspiration, Pablo Amaringo.
Avoiding problems:

- to meditate or do yoga prior to sitting down to work. If my mental state is resistant beating myself up is not going to help but maybe... 10 minutes in shavasana can change my state and open up pathways of mind that were closed before.

- I've been meditating on procrastination and why I do it for years (yes indeed, thinking about procrastination has become yet another means to procrastinate) and I had a few insights while working on this project:

1. that procrastination all comes down to my ability to pay attention fully - to be present and that more often than not (because of my emotional patterns listed below), I deem the project or the essay or whatever it is, as being unworthy of my time and attention but... that's not necessarily a reason to not be present.

2. it's possible to form a friendlier relationship with the inner critic, having a conversation with that overly vocal part of me that's so ready to say "this is going to be shit" and "what's the point?", being more compassionate about it's reason for existing - it's there to keep me safe in a tangible and immediate way because it's correct - I could put a load of effort in and still fail and it's trying to protect me from that, to comprehend it's role and feel gratitude for it but still ask it to get on my side, stop speaking right now and support me to take the next one step.